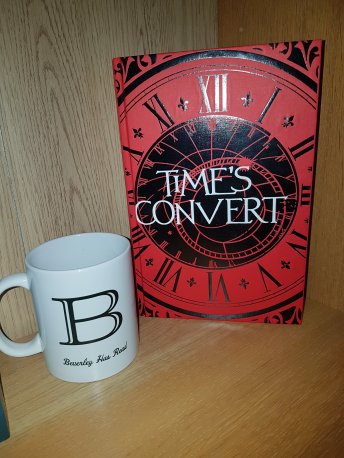 From human to vampire …

Marcus Whitmore was made a vampire in the eighteenth century. Over two hundred years later, he finds himself in love with Phoebe Taylor, a human who decides to become a vampire herself.

But her transformation will prove as challenging now as it was for Marcus when he first encountered Matthew de Clermont, his sire.

While Phoebe is secreted away, Marcus relives his own journey from the battlefields of the American Revolutionary War, through the treachery of the French Revolution to a bloody finale in New Orleans. His belief in liberty, equality and brotherhood challenged at every stage by the patriarchy of the de Clermonts.

What will he and Phoebe discover in one another when they are finally reunited at Les Revenants,beneath the watchful gaze of Matthew and his wife, Diana Bishop?

I am a HUGE fan of the All Souls Trilogy by Deborah Harkness which consist of A Discovery of Witches, Shadow of Night and The Book of Life and feature witch Diana and vampire Matthew. I recently re-read the first book as the A Discovery of Witches TV adaptation was about to hit our screens and I ended up falling back down the rabbit-hole and devouring the whole series. This book, Time’s Convert is from the same universe as the All Souls Trilogy and it features Marcus, Matthew’s (vampire) son and his girlfriend Phoebe, who is becoming a vampire. We originally met Marcus in the first book and Phoebe in the second and Time’s Convert allows us to get know them properly, to delve deep into Marcus’ past during the American Revolutionary War and examines how he became a vampire. We are also reunited with Matthew and Diana which, for this fan girl, was very welcome indeed!

Although this book is a ‘standalone’ you do need to have read the rest of the books, if only to understand the relationships and the implications of Phoebe’s decision and the dynamics within the family. I read this straight after re-reading the trilogy and still had to mentally take stock of some of the characters who in the trilogy were fleetingly mentioned, but in Time’s Convert were main players. It also goes without saying that this review is going to contain spoilers of the All Souls Trilogy because it is kind of impossible to review Time’s Convert without mentioning some of the things that happen in the previous books.  Deborah Harkness has described it as prequel/sequel so it is kind of assumed that you have at least some knowledge of the series.

In this book we are taken back in time to the American Revolutionary War which I really loved. I studied American history at A Level and it is one thing to read about the history of a country in dry, fact based history books (I am still traumatised to be honest) but is another thing entirely to read about it in a work of fiction which brings the whole thing to life. I really like Marcus as a character and he is one of my favourites in the trilogy so learning about his history and origins was so interesting. His personality as a warm-blood compared to a vampire is, for the most part, unchanged – principled, moral and with a brave streak a mile wide and it was wonderful to see the impact of his childhood and the sights he sees in the war on the man he becomes.

It is also glorious to meet Matthew in 1700s America and to see what sort of man he was then. We are told during the trilogy that Matthew in his past was an assassin and therefore quite a cruel man. When he and Diana travel back in time to Elizabethan England in Shadow of Night he struggles to reconcile his modern sensibilities with the ‘old’ version of his personality.  In Time’s Convert however, he is still cold, mercurial and distant but there was a distinct difference in the Matthew I expected to read about and the Matthew I met. He is softer than expected, and I have to admit, I did miss his dark side.

One of the main themes running through the book is that of family and loyalty. The book is split into three alternating stories; Phoebe becoming a vampire, Marcus’ past and Diana and Matthew’s life with their twins Phillip and Rebecca. There is a common thread of new beginnings in these three distinct tales and my favourite was reading about Phoebe and her transition into a Vampire. In the previous novels I didn’t really feel like I ‘knew’ her at all but she has become one of my favourite characters and it is through her that we really see how a Vampire family works. Who has the power, who should acquiesce, the strength of mating and the moments of respect and quiet reflection were beautifully and powerfully written. It allowed me to see the relationships elsewhere in the novel through new eyes.

This book made me feel all sorts of things. Nostalgia for Diana and Matthew, sadness for Marcus’ life, admiration for Phoebe, joy for the life which the de Clermonts have carved out for themselves. It is a bittersweet book (I need more All Souls books!) and I really, really, want to see more of Gallowglass – I love him. 🙂

My hugest thanks to Caitlin Raynor at Headline Books for sending me a copy of Time’s Convert, it made my year! Time’s Convert is published today and can be bought here.

This site uses Akismet to reduce spam. Learn how your comment data is processed.